Business and accountancy advice that makes a real difference

Hereford is one of the three cities that make up the Three Counties Region with Gloucester and Worcester being the other two. Centrally located and close to the Welsh border situated on the River Wye, it is chiefly known as a trading centre for a wider agricultural and rural area. Products from Hereford include cider, beer, leather goods, nickel alloys, poultry, chemicals, and cattle including the famous Hereford breed. It is famous for its high quality produce and many food and drink manufacturers are located in the region. It also has a long standing association with the armed forces particularly the Special Air Service.

Hereford has always had a strong cultural heritage. It is one of the three cathedral cities to host the famous Three Choirs Festival associated with the English composer Sir Edward Elgar and there is a thriving arts and cultural scene with the Courtyard Theatre and many other museums and art galleries situated in the city. It is also home to the famous Mappa Mundi which can be seen in Hereford Cathedral. It has a thriving shopping centre with many restaurants and cafés.

Being so centrally located, Young & Co can service clients right cross the UK and we are no more than 2 hours drive away from any of the leading commercial cities in the country.

History of our office

Young & Co is situated in Bewell House which was built in the latter half the 18th Century. The 1881 census shows that Bewell House was number 19 Bewell Street and we are not sure when it became Bewell House but an article in the Hereford Times as far back as 1838, shows an occupant, Mr Reynolds who made a contribution to the organ repairs at All Saints Church.

The name Bewell has a couple of meanings. The first is “Behind- the- wall” with the street sitting inside the old city wall. The second is that Bew-well intimates that there was once a well on the site. Indeed a local antiquarian, Mr W Pitley always maintained that there was an ancient spring on the site which was used in the Brewery. In one of the many developments of Bewell Street an inscription was found at the base of the brewery wall stating “Well, 71 feet, 1724.”

Bewell House is a Grade II listed building having been listed in November 1972. 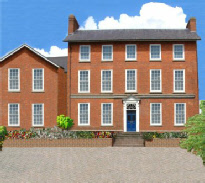